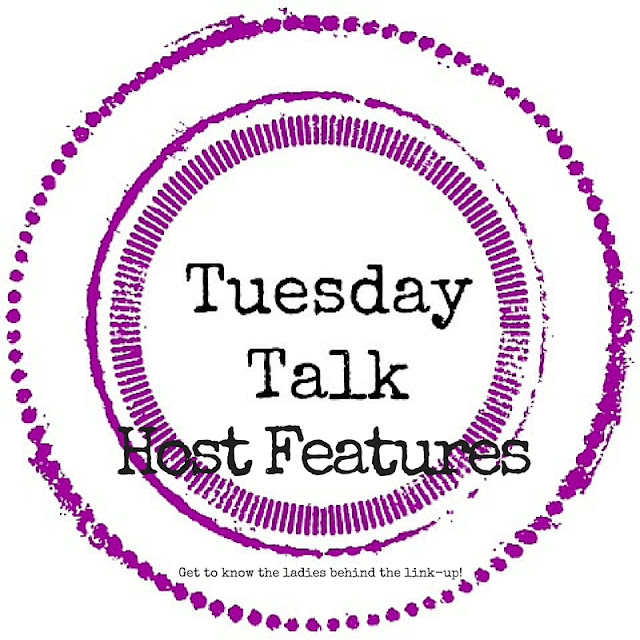 Welcome back for our third edition of Tuesday Talk Host Features!
Today I am excited to introduce you to another one of our awesome co-hosts, Tina at Go Big or Go Home. 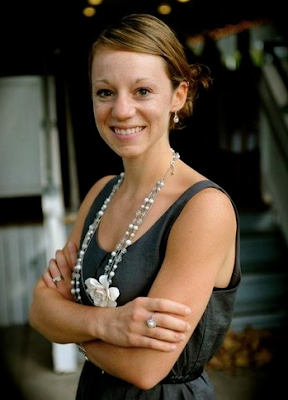 Describe yourself in 3 words:

This is a hard one! I guess I would have to say I'm a planner, reliable, and a doer.... I like to do things! You can see more things about me on my About Page.

What are five of your favorite things?

I have a lot of favorite things, so to pick a top five is going to be hard. But here are a few I can think of right now!
1) Oreos. Anytime, anywhere. I could eat those things all day long.
2) Glitter. It makes almost anything look better.
3) Iced coffee. I make extra strong coffee, mix it with almond milk, and then add chocolate syrup. It's like a iced mocha. Sooooo gooooood.
4) Exercising! I know this is obnoxious and annoying to list as a favorite thing, and I'm not sure I would call it my favorite thing while exercising, but afterward I feel like a million bucks, so I felt like I had to list it.
5) Girl talk. I love getting together with my girls and talking, chatting, encouraging one another, all while eating yummy snacks of course.

What is a motto you live by?

Go big or go home! It's my motto and where I get my blog name. I like to do things the way they should be done, going all the way. Otherwise it's silly to even start if you are only going to do a half job.

What makes you feel beautiful inside and out?

My husband! He is a great encourager and partner and even when I'm in sweatpants and in need of a shower, he can make me feel beautiful!

What would your one piece of blogging advice be for our readers?

Something I think every blogger needs to remember is to always stay true to your content. If you want to be writing about your life, recipes, and your dog, stick to it. Don't worry about how many people read your posts or get discouraged if they aren't being read. Stay focused on writing what you enjoy writing about- that's what is important!

What is your favorite meal?

So hard. I love to eat, especially if I don't have to cook it. But I love grilled chicken, homemade fries, and steamed broccoli. And of course it should include dessert.... probably oreo ice cream with fudge.

Mine would be the beach- any nice, warm, sunny beach. My family mainly sticks to the east coast and we have loved visiting Emerald Isle, North Carolina.

And don't forget to check out Tina's highlighted posts 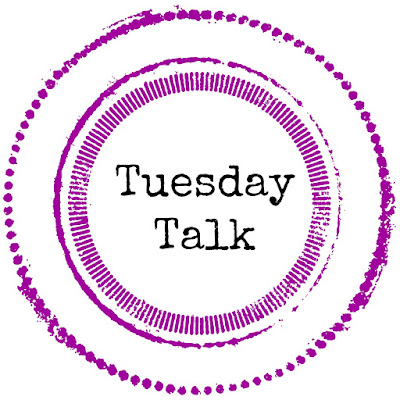 
By linking back you'll have the opportunity to be featured in our feature posts and pinterest board here! 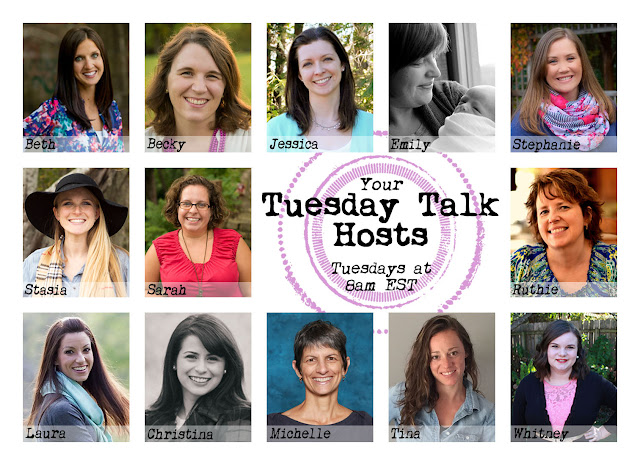 
An InLinkz Link-up
Posted by Christina at 7:30 AM 3 comments:

One for the Pregnancy Books

Do you ever find a cut or a bruise that you have no clue as to when or how it occurred?
It happens to me a lot.

It was no surprise to me then, when about two and a half months ago I found a small blister on the tip of my ring finger. I figured I must have pinched or burnt it and forgotten.
A few days later and it was bigger and multiple shades of red. A blood blister, I thought.

I consulted the family medical professional and was left with two options:
1) leave it alone and allow my body to reabsorb it or
2) use a sterilized needle and drain it.
Although B was intrigued and willing to play doctor on my finger,
I opted for the slow needle-free version.
Days later, all the relaxation of my long shower was gobbled up by the sight of bright red blood. A few calmer seconds later I realized the source was not pre-term labor, but my finger. It is amazing how one finger could provide so much blood. I tended to my hand and moved forward thinking that everything would heal within the week.

A month later it was almost a daily routine to have the wound reopen and soak through a bandage in seconds. Right before heading out the door, in the middle of the work day, watching a movie on the couch, driving in the car, and (the worst) right after putting white sheets on the bed. It wasn't painful (actually the tip of that finger felt almost numb), but it was hard to accomplish anything without a mess appearing.

I knew this wasn't normal and consulted a dermatologist and discovered it was a Pyogenic Granuloma, a little talked about occurrence during pregnancy. A few days later I was in the office having my finger numbed, scrapped, and cauterized. It wasn't until after the removal that thoughts of scarring entered my brain. In fact, as my doctor confirmed, my fingerprint was permanently altered! Baby is changing my life in more ways than one!
And that seems to be the end of this saga!

Now for the medical facts (in non-medical language):
And in regards to pictures, I was traumatized enough as a child by the cover photos of medical journals of such savory visions as this
- I will spare you.

What is a Pyogenic Granuloma (PG)?
A common benign skin growth that is typically small, round, and bright red - resembling a blister. More often effecting children and young adults, they are fairly common for pregnant women (despite this, there's no information about them on pregnancy sites).

Profuse bleeding can occur from the multitude of blood vessels contained within them.

They often occur after trauma to the area in which the body responds with the rapidly growing lesion. The full cause is unknown.

Why during pregnancy?
Again, the cause is unknown, but it is thought to be related to the dramatic hormone changes throughout pregnancy.

How are they treated?
Smaller PGs may be able to reabsorb without treatment.
Larger PGs are treated through removal.

Do they come back?
There is a chance of reoccurrence in the same or a nearby spot.
This is normally due to the entire growth not being removed.

Are they cancerous?
No, but they do test the removed growth just to be sure it is truly a PG.

Have you heard of this before?
Any other mama's have this symptom during pregnancy?
What was your most obscure pregnancy symptom?

By linking back you'll have the opportunity to be featured in our feature posts and pinterest board here!

An InLinkz Link-up
Posted by Christina at 7:30 AM 3 comments:

My sisters threw an adorable pink and blue penguin baby shower for us in January.
Since we are waiting to find out if Baby is a boy or girl,
we had to take a vote on what everyone thought baby would be.
The vote, of course, was preceded by modeling my changed figure and various questions based on old wives tales used to decipher the sex. I thought it would be fun to share some of those questions with you and my answers. Cast your vote in the comments and we'll see who is correct in the end!

Ugh, how do you tell?
Some people say I'm carrying high, others say low.
I am of the opinion that both might be right.
The blessings of being short waisted.

Peanut butter is protein, so I'll count that as a meat, but then I'm also craving salads and fruit...
but any meal without protein doesn't satisfy me, so I'm leaning towards the meats category.

I am discounting my ice cream cravings,
because I have never met a pregnant woman that doesn't want ice cream.

I took it twice on two different sites: one said boy, one said girl.
Another draw.

I'm not sure how this is a predictor.
It seems to me that weight gain over a short period of time would always lead to clumsiness
and what if one was clumsy prior to pregnancy?

B has gained a few Daddy Pounds.
Nothing returning to the gym after months of overtime won't fix.

I cannot sleep on my right side at all.
From what I can tell, Baby is facing the right side and must be a back sleeper.

Word on the Street

Most people tell me it's a boy.
That was the consensus at my shower.

As soon as I think it might be a boy/girl, then my intuition kicks in
and tells me I must be wrong,
convincing me it must be the opposite.
I have had dreams about labor, but none that included seeing the Baby.
All I ever see is a blanket around our little bundle of joy.

Hooray!
It's a baby!

What do you think?
I'd love to hear in the comments.
I have a grand ol' prize of,
"Congratulations, you were right!"
waiting for you. ;)

Nine Reasons I'm Afraid to have a Baby
by Currently, Kelsie


By linking back you'll have the opportunity to be featured in our feature posts and pinterest board here!

An InLinkz Link-up
Posted by Christina at 7:30 AM 3 comments: 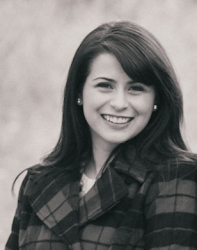 Welcome! I'm Christina, a new wife and mommy taking in the beauty of every day. Thanks for stopping by!

Join the party every Tuesday at 8:00 am EST!

A community of support every first Wednesday of the month.